Spinitron can send messages to remote systems over the Internet using a variety of protocols and message formats. The feature is designed to update now-playing displays by sending a message when a new song starts playing, or as close to as possible. It’s most often used to send to stream servers to update the embedded song metadata, RDS and HD Radio Program Info encoders, to TuneIn and to Twitter. It is used also for a variety of other custom applications such as web integration and mobile apps.

Metadata push is a different kind of technology from the Spinitron API. In the API, the remote system is the client and it requests (pulls) data from the server (Spinitron) when it chooses. In metadata push, Spinitron behaves as a client and it chooses when to send (push) out a message. The remote system behaves as a server and stands ready to receive a message from Spinitron at any time. Another difference is that metadata push is not reliable because Spinitron doesn’t push if spins are entered a long time after their timestamp.

You can set up a number of push channels in Spinitron, for example you might configure one channel for each stream, one for RDS, one for TuneIn, and one for Twitter.

The timing of push messages depends on the timestamp of the spin and on when the Spin is entered into Spinitron’s database. Default and max duration are used in the algorithm. See Metadata push: Default and Max Duration for full details.

DO NOT USE Username or Password if you don’t really need to. ONLY USE these fields to encode username or password in a URL, i.e. if you are using %un% and %pw% and you want Spinitron to URL-encoded your user name and password strings.

The username and password fields of the push channel form set the value of the %un% and %pw% template tokens respectively. The token values are URL-encoded. For example, if you enter p@$5w0&D for password then %pw% will have the value p%40%245w0%26D.

Templates are like URLs but with tokens (tags) for variable substitution. For most uses of metadata push there is a general form for the template that you can adapt to your situation. They are for

For more specialized applications Spinitron provides a flexible template editor allowing you access to a variety of protocols.

In all cases you are free to design the message to send with push using the template variables.

You design the text of the message to send using template variable substitution tokens or tags for short. A tag is a short code between a pair of percent character, e.g. %an% expands to the artist name and %sn% is for the song name. You can combine these with text of your own design, e.g. %sn% by %an%. In some contexts such as in a URL you may need to encode your text, for example a space in a URL is encoded as %20 or +, but you do not encode the tags.

SHOUTcast is proprietary software including Shoutcast server (SHOUTcast Distributed Network Audio Server or DNAS). Shoutcast defined a network protocol for streaming audio and video over HTTP that won the streaming audio war of the early 00s. Most stations using Spinitron stream with the Shoutcast protocol using either Shoutcast or Icecast software.

Shoutcast server is available for download if you register an account. It is used by some streaming service providers. It is not open source software and the free version has a number of features limited or disabled. In Jan 2019 it is at version 2.6 but version 1.9.8 (2007) is still used because of the differences between SHOUTcast 1 and 2.

Icecast is a free, open-source server. It is compatible with most Shoutcast sources and clients. It is an open-source alternative to Shoutcast server.

Configuration of Icecast is different from that of Shoutcast. There are also significant differences between Shoutcast 1 and 2.

Metadata push to Icecast requires this information about your stream

Icecast servers usually have a management web page. The URL is the same as the stream but with status.xsl instead of the MOUNTPOINT, e.g. http://203.0.113.12:8000/status.xsl. The page lists all the server’ mount points. For example this server has one mount point named /foo. 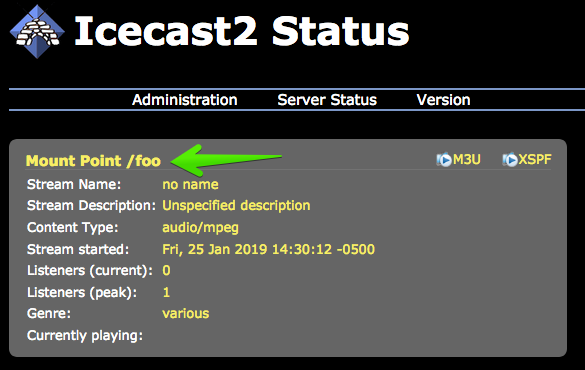 The general template for an Icecast metadata push channel

Do not use the username or password fields of the push channel form.

Metadata push to Shoutcast is similar to Icecast. You need to know HOST, PORT, and PASS for the stream (see the Icecast section above) but not USER or MOUNT.

If you visit http://HOST:PORT/index.html (e.g. http://209.222.145.148:8000/index.html) then you should see an management page with information about the stream and a link to log in as admin. In Shoutcast 1.9.8 the link is Admin Login and in 2.6 it is Server Login. It demands authentication. The username is admin and the password you need for PASS in push is the same as the one that works for admin login.

The general template for a SHOUTcast server is

Enter PASS in the password field of the push channel form.

You can change the song parameter to whatever you need using Spinitron’s Template variable substitution tokens.

You can also set a url parameter to set the StreamUrl stream metadata. It must be URL-encoded, for example

To push to TineIn, you need

If you don’t yet have an ID and key to access the AIR API then email broadcaster-support@tunein.com to request access, identifying your station and mentioning that you use Spinitron.

The push channel template is

Then in set up a metadata push channel with something like

Change the part after the colon to whatever you need using Spinitron’s Template variable substitution tokens. You can include URLs.

You may prefer to dedicate one Twitter account exclusively to Now Playing updates rather than mixing it with your general social media statuses.

To push a display text update to an RDS or HD Radio encoder, you need to send a message using the exact protocol and format that your equipment expects. Find the make and model of your equipment and try to find its documentation too. It may take some trial-and-error to get the settings right.

Some encoders expect a text command sent over UDP or over a TCP connection. In this case you need to know

The commands we have seen most often are DPS and TEXT but there are several others, it all depends on your specific equipment.

Assuming you want to send both a DPS and a TEXT command, the template might be for example

Change the text to whatever you need using Spinitron’s Template variable substitution tokens.

NOTE: There needs to be a newline after each command, including after the last one. Be sure to include that. Some users have found that putting X on a line by itself after the last command can force Spinitron to send a newline but this may not be needed.

Network connectivity and security for RDS

Such equipment is designed to be attached only to a secure private LAN and that’s usually how they are deployed, i.e. behind firewalls.

For Spinitron to be able to send the commands that update RDS or HD Radio Program Info texts, you must

It’s up to you to model and assess the risks.

As an alternative to opening a pinhole in your firewall(s), you may be able to set up a custom secure reverse proxy. For example, if you have a web server in the Internet running on a computer that has an interface to your private LAN over which it can reach the RDS encoder, then you could write a script (e.g. PHP, Python, Perl etc.) that runs on the web server to function as reverse proxy. The reverse proxy script accepts HTTPS requests from Spinitron, authenticates the client’s shared secret, accepts a text message (e.g. in a query parameter), runs some checks and if all is OK sends a command to the RDS encoder. For more ideas, review this skeleton example written in PHP.

Spinitron’s channel specification form allows you to compose the template and preview it either with the variable tokens or with example data substituted into the variables.

Escape sequences for special characters into the template

For everything else, enter characters directly as in any other app that supports Unicode. Spinitron usually encodes characters outside the ASCII range in UTF-8 for transmission.

The following contrived example demonstrates most of these editor features.

Metadata push provides the following protocols with these protocol tags

Begin the template with twitter: as protocol tag followed on the same line with your message template, e.g.

Spinitron must be authorized to use Twitter for this to work. See above.

HTTP and HTTPS GET

Query parameters are sent in the request URL.

Prefix a http:// or https:// URL with POST to send a post request with application/x-www-form-urlencoded data, e.g.

Would send a POST request with the URL https://example.org/form/path. Data in the query params are encoded into a form with fields artist and title.

(Relative to a GET request, the POST prefix moves data from the URL query params into a form, so to speak.)

Prefix a http:// or https:// URL with FILE to send a post request with multipart/form-data body. On the lines following the URL put a template message to send as a file upload, e.g.

Form an FTP or FTPS URL as in the following example, followed by the template text of the message to send as a file upload.

Use protocol tags tcp:// or udp:// followed on the same line by HOST:PORT. Put the template text of the message to send on the following lines, e.g.

The following template variables are used in Metadata Push and in Twitter link text.

Here we descrbe Spinitron’s timing of metadata push events and cancellation policy, in which the Default Duration and Max Duration configurations play their part.

Spinitron’s metadata push feature sends now-playing song updates to things such as stream servers, RDS encoders and the like. We assume that the receiver of a push message updates its display to users when it receives the message. So the timing of when Spinitron sends the message is important.

If Spinitron has advance knowledge of a spin, schedules the spin’s push messages at the spin’s timestamp. But if is told about the spin late, which can easily happen with manual playlist entry, then it will either push the message immediately, if the information is not too old, or not at all.

In technical terms, with respect to a given spin, define