Tom, thank you so much for your kind words. I decided to do an instrumental bluegrass album because first, bluegrass is almost non-existent here in Portugal and I wanted to have something recorded so I could show people here what is bluegrass music and second, I have focal hand dystonia and my ability to play the banjo is slowly decreasing and I really wanted to record something before it was too late. I invited 15 musicians from 10 different countries. A real global bluegrass album. I asked the DJ to correct the name and she did. Everything is working except the box to amazon and spotify. Is there a way to check that?

The reason why the Amazon and Spotify buttons aren’t working isn’t obvious. I can treat that as a bug and investigate later.

I’ll send delay rays across the Atlantic aimed at whatever afflicts those hands. Best I can think of and worth a try ? : )

By coincidence, I acquired an acoustic guitar just last week with the aim of learning some bluegrass. I’ve played electric for 40 years but most of my skills are useful only in a band. I want to be able to play unaccompanied in social situations.

Tom, please do. It’s the first time I have a tune on spinitron and it would be great if the boxes all worked.

Hahaha. Yeah, I need some of that.

Bluegrass music works in every situation. I love it.

I think the problem is that our primary database that includes ISRC doesn’t have your release yet. The latest version available is April 2. We used to get updates nearly every day before the plague but no updates for one or two weeks is typical now. When did your release first appear in services like Spotify, Apple and Amazon?

While I’d like to have those buttons working for you, TBH, they won’t make much difference to your exposure to audiences. If you are doing your own promotional work then Spinitron can be a great resource for you to get your music in the hands of music directors and individual DJs and therefore to get them playing it to their listeners. Given the unique and exotic hook of Bluegrass from Portugal (or some such) I think this might be very effective. Let me know if you’d like me to explain how it might work.

I think it’s that. The track was released on April 12, so much later than April 2.

About the other aspect you mentioned, I would really like to know more about how it works.

Hi André, the answer turned into a standalone guide: Using Spinitron in promotional work. Feel free to ask questions or add comments to that thread.

On Sunday afternoon May 16, listening to playback of KCSM’s May 15’s 6pm Weekend Jazz Oasis worked well with decent fidelity for about 1/2 hour; then became distorted briefly before cutting out completely. I then reset the player for the 7pm segment, and the same thing happened. Ditto for the 8pm segment. Any help would be appreciated. Thanks!

Spot checked at all times noted for at least two minutes with no issues (30 and 45 minutes in) using ARK. I will listen to our logger later to hear outbound stream. First time for this kind of complaint received.

Hi @PeterYedidia, thanks for joining the forum.

I’m testing KCSM’s May 15’s 6pm and it’s playing now through minute 46 no problems. The Django recording at 6:30 was pretty scratchy but I don’t think that’s a problem with playback.

I’m testing KCSM’s May 15’s 6pm and it’s playing now through minute 46 no problems. The Django recording at 6:30 was pretty scratchy but I don’t think that’s a problem with playback.

Thinking back carefully on it, for the first session, starting at 6pm, there was distortion on Django, after which I think Michael reviewed the set and the distortion continued. Playback didn’t stop, I refreshed the player and set it to play back the 7pm segment. (See below.)

The 7pm session played back well for 20-30 min, then playback stopped. I then set the player to the 8pm session, which played for 10-15 min and then stopped.

I was using an Amazon Fire HD8 tablet with the built-in Silk browser, which is adapted from the open source version of Chrome.

I was using an Amazon Fire HD8 tablet with the built-in Silk browser, which is adapted from the open source version of Chrome.

Was the Fire plugged into a power source and set to not turn off or lock its screen after a time?

Yes and yes. I use the tablet daily, exclusively to connect various players via a cable to decent speakers. It’s reasonably good at streaming near CD quality sound when connected this way.

Have you used it successfully in the past with the KCSM archive? If so then it might be worth turning the device off and on again.

I’ll try myself later on our Kindle Fire.

Is Silk the only browser you have on it? I have Firefox but I think I had to go through a complicated unofficial procedure to get Google Play Store installed first.

Confirmed the was no issue with source programming.

I tried the 7pm May 15 segment using Chrome (I also maneuvered to put Google Play on the Fire like Tom did) and, unfortunately, it stopped again at 7:37. 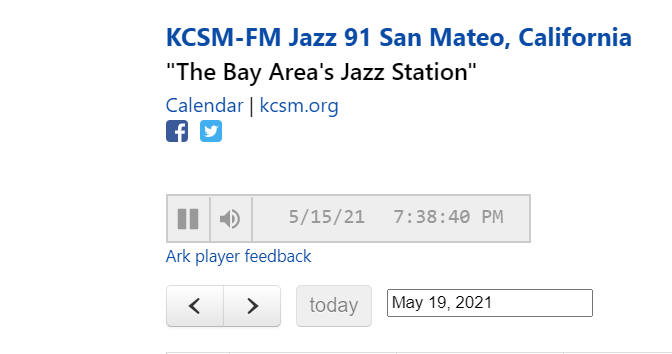 On my Kindle Fire, in the settings, the Display Sleep setting is at maximum: After 30 minutes of inactivity. This might explain what’s going on. It’s a problem we have on mobile that browsers stop the JavaScript of any web page if that page isn’t in the foreground with the screen turned on. More info here.

I tried setting the display sleep timer to 30 minutes and, while plugged into USB power, I’ve been listening for 1 hr and 20 min using the Silk browser. But I touched the screen a couple of times, which resets the 30 minute timer each time.

Thank you everyone for your help with this! Tom, I think you’re probably right. I’ve now tried three different mobile devices, with sound cutting out on each after about 30 minutes. (1) Fire HD running Silk browser. (2) Fire HD running Chrome. (3) Android Pixel 3 smartphone running Chrome. (Even the Silk browser is based upon open source Chrome.) And yes, on my desktop running Windows 10 using the Chrome browser, the 7pm May 15 segment has been playing continuously for over an hour. For people like me, the advantage of using a mobile device is that I can easily cable it to good speakers. Again, many thanks.

How to keep your Kindle device from going to sleep

The Rooms app performs best when it can continuously show what's happening in your meeting rooms. Kindle devices will allow you to prevent the display from going to sleep during the day with a &quo...